July 05, 2012
Another update (11/19/2013): further evolution of Office 365 services makes creation of distribution and security groups even easier, plus there's now an option of creating a dynamic distribution group (click here for more information): 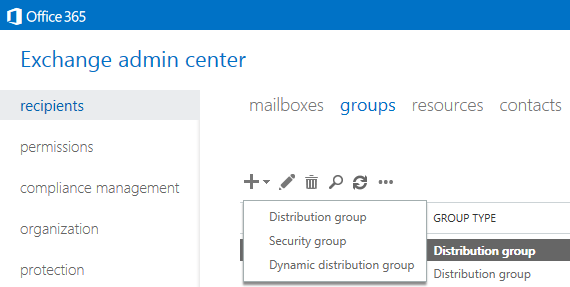 Update (08/06/2012): a clear sign of Office 365 evolving along the same lines as other agile cloud services - small incremental features and minor new functionality are being delivered almost continuously and, unlike important major service updates, without much fanfare. For example, there's no need to resort to using PowerShell to setup mail-enabled security groups anymore, it can now be done at creation using management portal: 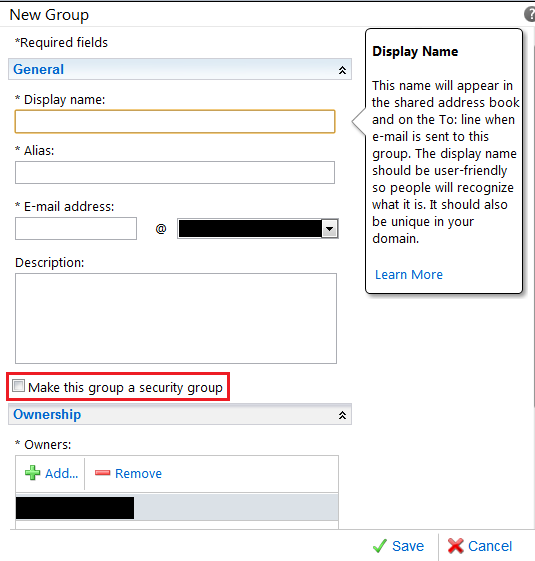 Those managing Office 365 (O365) tenant via the Microsoft Online Services Portal (MOS Portal) interface would notice that there are two distinct group entities:
This suggests that if one needs to group users for permission assignment and email distribution, one would need to create two different groups - a security group and an email distribution group. Clearly, there are cases (for example: when the same users need to be assigned permissions to a resource and receive email notifications about it) when it would be desirable to have a single group to be used for both.

In on-premise Active Directory (AD) and Exchange one would use mail-enabled security group for this purpose, but what are the options in Office 365?

Surprisingly, the answer to this question wasn't as forthcoming as I would expect it to be and finding any information on how to create an email-enabled security group in O365 proved to be challenging. Finally, I came across the following Knowledge Base article, which indicated that it could be done via directory synchronization (DirSync) tool.

This is great, but what about environments that don't use DirSync? First of all, there’s clearly no way to accomplish the desired via MOS Portal (sorry, no point-and-click). So, one would have to resort to using PowerShell. After looking at the various PowerShell cmdlets for O365 and Exchange Online and doing some poking around, I came to the following conclusions:
Here's a sample PowerShell statement:

For more information about the command try one of the following:
To view group properties, the following sample PowerShell statement can be used:

When retrieving information about distribution group created with -type "security", expect to see the following as part of the output:

Distribution group created with default options would have it as:

Popular posts from this blog

Skype for Business and VTC Interoperability

November 05, 2015
Skype for Business (SfB) has a very, very strong potential, I have written about it in my previous post . I can't think of any other platform that shows as much promise in terms of bridging personal and business communications as well as unifying different modes and mediums. And all of this may have started with a strategic acquisition of Skype by Microsoft in 2011. That said, the road ahead is not without challenges. For example, interoperability with other platforms. Making SfB work with existing Video TeleConferencing (VTC) systems, many of which represent significant capital investments in organizations' infrastructure, could be of a particular importance. After reading statements like Skype for Business is based on Session Initiation Protocol (SIP) standards and supports H.264 (MPEG-4 video coding standard) one can come to a quick conclusion that integration and/or interoperability with other VTC solutions is easy or nearly automatic. Unfortunately, the industry is not
35 comments
Read more